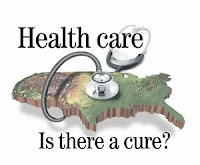 The current proposals that are presently getting attention in for Health Care Reform are really proposals for a Government Health Care take over and an expansion of an already growing problem. Real health care reform would and should be much different.

First, it is important to understand that physicians are not permitted to negotiate their rates with patients that don’t have health insurance. The contracts that physicians have to sign with private insurance companies forbid it and federal law says that it is fraud for physicians to do so for Medicare co-pays. I know this sounds really technical and that is where the current health care system is REALLY broken. The more people that understand the little known details, the greater the chance that the actual change in the Right Direction will happen.

Some may not understand, so I will explain. In order for physicians to bill private insurance companies for their services to patients, there must be a contract between the physician and that insurance company. Okay, that is simple enough to understand.

So, in order for the physician to stay in practice, he must artificially inflate his rates so that he gets a decent amount of money after the insurance company applies it’s discount. What people rarely know is that the physician is not permitted by contract to give that same contracted discount to a person that doesn’t have health insurance, they have to be billed the full inflated price! Basically, private insurance companies have forced costs for the uninsured to be inflated.

Those of you that think that a government run public plan would fix this are mistaken because the federal government already does exactly what the private insurance companies are doing. The only difference is that if a physician contracts with Medicare and they privately negotiate rates with a patient on Medicare, the physician would be sued and jailed for fraud.

This also may be a little much to understand so I will give an example. An elderly woman comes into see her doctor and she is on Medicare. Now, we all have co-pays, and for elderly people on Social Security the co-pay can be a lot of money. A physician cannot, by law, say to that elderly woman that he will discount the co-pay. If he does, he could go to jail for fraud! Now think of a government run public plan with a co-pay that you can’t afford and a doctor that, by law and threat of jail, can’t discount.

So, when you read or hear about Health Care Reform and you hear about a public option, keep this little known fact in mind. Physicians are forced to inflate their rates to stay in business there fore, pushing people to purchase expensive insurance plans because they can’t afford the physician’s rates on their own.

Bottom line, end the contracted agreement that physicians cannot negotiate rates with individuals without health insurance. This one change could open up health care access to millions of those who cannot afford it now.

Posted by Augusta Conservative at 1:15 PM