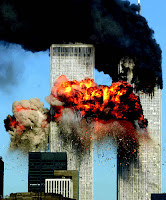 Several families of victims in the 9/11 terrorists attacks are outraged that Eric Holder, U.S. Attorney General under President Obama, has handed the trial over to the New York criminal courts instead of the military courts. These five terrorists that will be prosecuted will have full use of the American judicial system with all the rights and privileges of United States citizens. These families believe that the trial will be little more than a propaganda circus that bashes both the United States Government and the policies of former President George W. Bush. These families have started their own website and have a petition letter to President Obama for the reversal of Attorney General Holder's decision. So far they have over 110,000 signatures. They are also organizing a rally on December 5th in New York City, more here.
The five terrorists have a defense attorney that was named to be Scott Fenstermaker. He was on the O'Reilly Factor last night and said they have a right to a fair trial if they are to be prosecuted in the criminal court system. He did concede that his purpose was to guarantee these terrorists a fair trial and by that meaning that he is tasked with having these men cleared of the charges in relation to the 9/11 terror attacks.
Interestingly enough, Mr. Fenstermaker commented that even if they did get cleared of all charges, the United States would never let them go, see Video here. So, my question is, "What's the point?"
Posted by Augusta Conservative at 10:30 AM