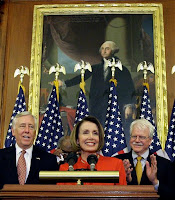 According to the Associated Press, at 11:15 pm last evening, the Health Care Reform bill submitted to the House of Representatives by Speaker of the House Nancy Pelosi narrowly passed on a vote of 220-215. Every Republican save one a freshman from New Orleans and 39 Democrats voted against the legislation. Speaker Pelosi held a press conference afterward praising the historic move.
The 1,990 page, 1.2 trillion dollar piece of legislation that creates a government run health care system could be more expensive and burdened with bureaucracy than our current system, according to the Congressional Budget Office, CBO.
The bill now goes on to the U.S. Senate for debate. If the Senate passes the bill it moves to be signed by the President. Here again is our chance to get the word to our representatives in the U.S. Senate, call them and let them know that you don't approve of the largest government take over of health care on record.
Posted by Augusta Conservative at 7:48 AM