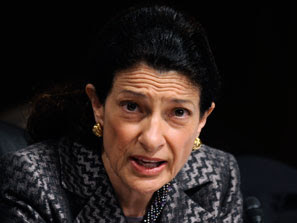 The Senate Finance Committee passed a version of Health Care Reform yesterday, which moves President Barrack Obama's agenda of government run health care closer to reality. Politico reports that Republican Senator from the state of Maine, Olympia Snowe was the only republican to vote "yes" in the committee. Snowe stated, "I happen to think the consequences of inaction dictate the urgency of Congress to take every opportunity to demonstrate its capacity to solve the monumental issues of our time.” Of course, time and wisdom will tell if her action actually helps solve health care or make it worse.
This version of health care reform requires that all Americans have health insurance or else pay a fine of $1,500 per family, it also sets up for a health care co-op, and does not require employers to offer health insurance to its workers. Its version of health care reform has a price tag of $829 Billion dollars.
I still have issue with the government imposing a fine on those who cannot afford health care insurance, not even the government plans. It is wrong to take the money from them and not give them a health care plan in return for it. This is yet another example of why the government is only interested in revenue and not in the people.
Posted by Augusta Conservative at 8:24 AM