Who can write the longest Health Care Reform Bill! 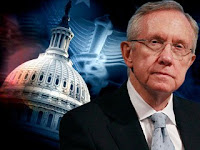 Senate Majority Leader Harry Reid has finally released his version of Health Care reform. His bill is 2,074 pages long and costs $849 Billion dollars!! Read it here. Sen. Reid plans to hold the vote for floor debate on Saturday. They will then take up the measure once again after the Thanksgiving break, with far fetched hopes of getting the bill to the Presidents desk by the end of the year. I have contacted my Senators, Webb and Warner and encouraged them not to support this form of Health Care Reform.
Posted by Augusta Conservative at 10:09 PM