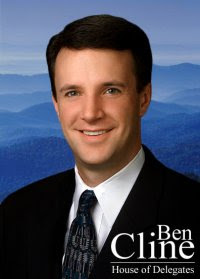 I was able to catch up with State Delegate Ben Cline of Virginia's 24th district. My first impression of Delegate Cline is one of a well rounded personality. He has passions and conviction about his work in the Virginia House of Delegates. He seems to always be on the move. I asked him about the campaign. Delegate Cline said, “I am anticipating the debate, I have been opposed four out of the five times I have run for this position, I am getting used to it.” I asked Del. Cline what got him into politics. He stated, “I worked for Congressman Bob Goodlatte when he was first elected. I worked hard on that team, especially the balanced budget amendment, and learned a lot. When the opportunity came to run for state delegate, I saw it as a great way to help my community.”

Education has been a priority for Delegate Cline, he said, “I have always worked as a leader for education reform. We are working to make sure that money is going to the classroom, I have been working on the 2/3 rule which obligates school boards to prove that $2 out of every $3 dollars is going into the classroom and students.”

“With education, we are also trying a new formula that sets a 4/1 ratio for teachers to staff.” Using this standard, schools would have one staff member for every four teachers. These staff include the principal, vice principal, secretaries, janitors, food workers, etc. The efficiencies that are created would save money that could be put to better use updating classrooms.

Delegate Cline has been fighting high dollar Virginia Lottery licensing. The profits from the Virginia Lottery go to funding education throughout the state. Delegate Cline explained how the state of Virginia paid up to $840 thousand dollars for the license to offer the “Deal or No Deal” lottery tickets. Delegate Cline said, “Paying such expensive licensing fees is ridiculous, we could be using that money better.” He is supporting legislation to change this practice.

Job creation, especially green jobs, and the economy are hot topics these days, I asked Delegate Cline to explain his views. He said, “I am concerned about the environment, however right now we need all kinds of jobs. It is the role of government to keep taxes and regulations low through cooperation with local governments and efficient practices. Government is supposed to foster new business while adhering to local comprehensive growth plans.” I asked him what his recipe would be for job creation. He said, “Education is key, especially community colleges, we need to tie in local high schools with local community colleges by offering some courses in high school that earn credits in college. We will have forty thousand new students in the university system and we don’t have the seats available. Another step is offering classes in high school and community college that prepare students to work in local industry, this can help keep our next generation close to home and improve our local economy.”

I asked Delegate Cline what legislation he was most proud to support in this last term. He said government transparency legislation. He explained that it is an internet site that would disclose every penny of state money and where it was going. This program is still under construction and will need further support in order to be completed. Through this program any citizen would be able to log in and track whatever money whenever they want. It would be an excellent tool for the people of Virginia to keep an eye on big government.

Delegate Cline is a strong Pro-Life supporter. He stated, “I have introduced legislation that takes practical steps towards life that both sides of the aisle can agree on.” One such bill was to offer fetal anesthesia before an abortion is carried out. He said, “It passes the House of Delegates every year and then it is killed in the Senate.” Another bill he would like to see passed is that a woman must have a sonogram before she has an abortion.

Gun control is a hot topic this election year. I asked Delegate Cline about his perspective. He stated, “I am extremely proud of my A+ rating from the NRA and I am a member of the Militia, Police, and Public Safety Committee in the House of Delegates. I have supported legislation that would increase the opportunity for people to carry concealed firearms, and a no permit fee for retired police and military personnel.” Meaning, while retired police and military personnel are required to obtain a permit to carry a concealed weapon, they would not have to pay the fee's required by the state to obtain it.

I asked Delegate Cline if he considered himself a conservative. He stated, “I do, I believe in the power of the individual to determine their own fate. I believe the primary role of government is the protection of our constitutional rights, the defense of our freedom, and the limited ability of government to affect a person’s ability to pursue their destiny.”

Virginia State Delegate Ben Cline represents Rockbridge, Lexington, Buena Vista, and parts of southern Augusta County as the 24th district representative. He is running for re-election this November and humbly asks for your continued support. For more information on Delegate Cline and what he has done in his service to Virginia, go to his website, www.bencline.com
Posted by Augusta Conservative at 1:37 PM