A Conversation with Delegate Chris Saxman 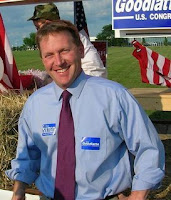 I had an opportunity to sit down with Delegate Chris Saxman and have a conversation about his experiences in the state legislator, where he stands on issues, and about his campaign.

First off, I was surprised and refreshed by how accessible he is. He stated, “People come up to me and we talk all the time, I go to the local YMCA and use the elliptical and I connect with residents. I go to Food Lion and get groceries and people will stop me and ask questions, I love it.” He spoke about how he gives his email address and cell phone number out regularly. He spoke about the many town hall meetings he does and mountains of surveys that he puts out. “I don’t like being a politician that is constantly trying to get your attention. People don’t want to hear about politics every minute of every day. I respect their time and make myself as available as I can be.”

Chris Saxman is a very down to earth kind of guy. He isn’t just an elected representative; he is a husband and father of four. When he is not fulfilling his role in government, he is running the family business, Shenandoah Valley Water. I was impressed by his story of getting into politics. “When I was a high school teacher of US History and Government, my students suggested I become more involved – so I did. That was 1992.” He spoke about how important it has been for him, being a delegate, to have grown up here in the valley. He delivered newspapers and cut the lawns of people he now represents in the House of Delegates.

We also discussed the economy and job creation. I pointed out that his opponent wants to bring green jobs to the valley. Chris responded by saying, “We need all types of jobs. We can’t pick and choose what jobs will be created through government, that is not governments role.” He also said, “With unemployment reaching 10% in Virginia, residents want any job. They don’t want a government handout, they want to earn it.” He said, “When a person has lost their job, they also feel their dignity as a human broken by not being able to support their family, and they want that back, not a government handout.”

We spoke about what his recipe for job creation would be. He said, “We need to learn from other states past mistakes. Virginia is the #1 state for business for a reason. We look at what other states have tried and we implement the changes that work at growing business and creating jobs. The lowering of the marginal tax rates and other taxes also help to create jobs.” He said, “If government is going to spend money to create jobs, it should be through investment in infrastructure, such as roads, schools, libraries, and other services that are already provided but need repair and improvement.”

I asked him how he felt about being challenged in this election; he stated, “Anyone who tells you that they prefer a contested election to an uncontested one is not being honest. That being said, I do enjoy the arena of ideas and I am very much looking forward to this election.”

We also touched on education. Chris has been a long time advocate of school choice and vouchers. He believes parents should be free to pull their child out of a school that doesn’t have the best learning environment and be able to take their tax money with them to another school. He said when you remove a child from the public school system and put them in either private or home schooling that the government actually saves money, even after you give the parents the school voucher. He referenced a statistic that showed the state of Virginia actually saves about 1 billion dollars a year on education due to private and home schools.

We spoke about gun control and where he stands on the 2nd amendment. He said, “I have an A+ rating from the NRA; I carried Gun Rights legislation to the state government.” He recalled an instance in which he helped work out a deal that preserved a shooting range in Fairfax County.

I asked him, “What are the most rewarding moments of your political career?” He stated, “Having ground broken on the Virginia School for the Deaf and Blind, working to keep the Commonwealth Center open, and helping with the new Western State hospital, were among many things that I have been proud to help get through the state legislature.”

I asked him if he considered himself a conservative. He said “Yes, absolutely. We should only spend taxpayer money on things that government should do. We should spend it well and in a way that we can expect measurable results, so that we can find areas for improvement. We also need to practice restraint and look for the time tested truths of what works and what doesn’t.”

We also touched on Universal Health Care; I asked him what he thought of the idea. He stated, “I am completely opposed to it, show me one country where it has worked, and worked well.”

My last question was what are your ambitions for public office? He stated, “Right now, to win in November.”

Overall, I found Chris Saxman to be a very intelligent, well spoken, down to earth individual. He didn’t run from any question and took the time to explain and support his point of view until it was understood. Chris Saxman is running, as an incumbent this November, for the 20th house seat in the Virginia House of Delegates.


Interview done by David A. Karaffa
Posted by Augusta Conservative at 11:10 PM