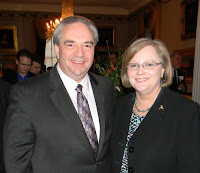 On Wednesday, I spent the day with fellow bloggers in , the Capital of Virginia. I had been looking forward to the day for weeks and thought it would be fun. SWACgirl (Lynn), The Journey (Bob), Augusta Water Cooler (Jason), and I (Augusta Conservative) were guests of the Lt. Governor for the day. While I had a good time with my friends, it was also an experience that I will never forget, it put to rest some of my anxiety that I had been feeling about the direction of the economy in the Commonwealth and I had a wonderful opportunity to really get to know our Lt. Governor Bill Bolling and his wife.

When we arrived in we were invited into a beautiful executive room, which we later found out was the Governor’s Cabinet Room, where about twenty other bloggers from the Commonwealth were getting acquainted. I quickly realized with my introductions that this group was unique. The bloggers assembled were experts on the budget, transportation, economics, politics, and the cases that had been and were going to the Virginia Supreme Court. Once the Lt. Governor arrived it became apparent that the question and answer session was going to be intense. I can only convey my amazement at how well the Lt. Governor and his aids were able to answer all of our questions on a broad range of subjects with a level of detail that proved their mastery of the subject. I came away from that meeting with a very secure feeling that Lt. Governor Bill Bolling and his team are some of the best and brightest that Virginia has to offer and that, if given the tools, will be successful in bringing jobs to the Commonwealth.

My second point is about Bill Bolling himself. Before going to , I knew little of Bill Bolling except to say that he was the Lt. Governor. I truly hadn't paid him much mind because Bill Bolling seemed like a behind the scene kind of guy. However, during the day, I had the opportunity to meet with him in the Cabinet Room, to watch him run the Senate during session, and had the opportunity to speak with him one-on-one three times over the course of the day. Bill Bolling is an extraordinary man; years ago he started in politics as a Board of Supervisor member in . He worked his way up the chain in the Capital and has a great respect from all the members of the Senate. While I was watching him run the session for the day, I was able to see him quiet a senator who had spoken out of turn. The senator apologized to the President (Lt. Governor is President of the Senate), and waited patiently for his opportunity to speak. This along with many other small examples from the day truly highlighted how much he is respected by his colleagues.

I found Bill Bolling extremely easy to talk to and he showed an honest desire to listen and answer questions. His answers always had the degree of knowledge and understanding that I was looking for and he didn't ramble on as some representatives do in order to not answer another question. He is wise and humble, yet comfortable in his role and in himself, and extremely gracious.

I have been looking for a statesman among the politicians in our government and upon leaving the capital that day feel confident that we have that representative in Lt. Governor Bill Bolling. Meeting him and having the opportunity to get to know him has restored, to some degree, my belief that there are some in the political arena that are involved not for their personal gain, but for the betterment of the Commonwealth. I would encourage any person who reads this post and doubts my opinion to get to know the man, go online and look up his public schedule, see when he is going to be in your town and plan to meet him. Do not rely on my opinion or on the opinions of others, as they are just our impressions. You should meet this representative who has worked tirelessly in and throughout the Commonwealth for your interests and liberty.

H/T SWACgirl for the Photo of Lt. Gov. Bill Bolling and his wife.

Posted by KaraffaRN at 9:58 PM