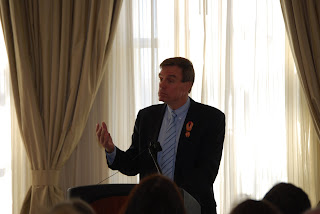 The morning after Tax Day Tea Parties were held around the country, U.S. Senator Mark Warner visited the Stonewall Jackson Hotel in Staunton to hear from local residents. He addressed around 80 people on a range of issues from the Stimulus Package, the Economy, Bailouts, Health Care, and the Obama Administration before opening the floor to the people.

Warner stated that the country is in the midst of financial war and the stimulus package may have been the necessary blow to keep us out of a depression. He also stated that there were parts of the bill he didn't agree with. Warner used the excessive bonuses paid to AIG Executives as an example, stating that it made him "Madder than Heck." He went on to say that AIG had to be saved. 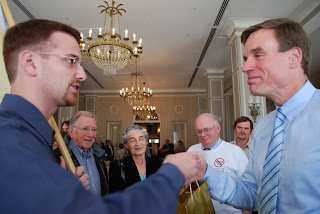 David Karaffa, of Augusta County, who attended one of Wednesday’s tax tea parties, told Warner he fears his children will be saddled with paying the national debt years from now. Karaffa held up a "Don't Tread on Me" Flag as he spoke. After the meeting, Karaffa presented the Senator with a gift bag full of tea bags that had been collected at the local tea parties and stated "Mr. Senator these bags of tea are presented to you as a reminder to spend taxpayer money with wisdom and prudence."

To read more go to The News Virginian and The News Leader.
Posted by Augusta Conservative at 4:46 PM