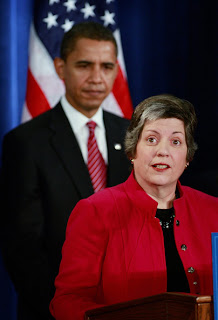 President Barrack Obama
stands behind his choice for
Homeland Security Secretary,
Janet Napolitano.
In a report, dated April 7 but begun last year, the Department of Homeland Security's intelligence section stated: "The return of military veterans facing significant challenges reintegrating into their communities could lead to the potential emergence of terrorist groups or lone wolf extremists capable of carrying out violent attacks." A footnote that defined right-wing extremist groups as primarily hate-oriented or anti-government also stated: "It may include groups and individuals that are dedicated to a single issue, such as opposition to abortion or immigration."

Seems as if the Secretary of Homeland Security has a problem with returning Veteran Soldiers. President Obama should have asked for her letter or resignation immediately. However, he remained silent, allowing an insult to U.S. Soldiers to stand.
Posted by Augusta Conservative at 10:37 PM